From an obscure Roman colony to one of the biggest world empires, the British has brought a sense of sophistication that surpassed any trend. British interiors are bold and refined that carries a vibe of elegance regardless. Similiar to American interior design, the British infuses their interiors with a sense of pride in their tradition and heritage – – making anything British indelibly stamped with an air of grandness which is truly livable.Living in style that is.
Not to be confused with something snooty, British interiors is simply put – refined and definitely put-together.

Bring some #anglomania to your bedroom and give it the signature British style that’s chic, timeless and most definitely worthy of a royal approval.

Here are a few tips:

British Period
The British pride themselves with their rich history and tradition. To add an anglo-vibe to your room, utilise vintage, period pieces – such as a nice vintage framed watercolour, vintage-inspired drawers and dressers, nice clocks and the like to give a Downton Abby-esque feel to your room.

Pro-tip:The British Royal Navy is known to be one of the oldest existing in the world and reached its pinnacle during the Victorian Era. Add some Victorian naval inspired touches, such as old globes, trunks and the like to give your room a chic touch inspired by Her Majesty’s Naval Service.

Colonial Touch
The British Empire was one of the largest and most powerful in the world. This has caused widespread British influence to its many territories. While the British influenced its colonies heavily, it was also likewise influenced by its territories. Combine traditional British pieces with a sprinkling of Indian or Chinese touches for an East-Meets-West look that’s very British.

Royal Comfort
Despite its grand formality, British style interiors elevate comfort to a royal level. Fill your room with comfort-inducing touches, like thick luxurious drapes, a plush, padded bed – anything to make your room truly comfortable. After all, your bedroom is your kingdom, and you are its royal sovereign.

Pro-tip:Pro-tip: For true royal comfort, visit our post on “Royal Inspired Bedrooms” to see how you can get inspiration from the Royals of the World for one uber-comfy room.

Sabu Table Lamp in Dark Antique SilverThe Sabu features a quaint elephant base which gives the table lamp’s otherwise traditional design a nice twist. This lamp is a nod to the British East India Company.

Cynthia 3-drawer BedsideThe Cynthia is a streamlined version of a classic Queen Anne style design. Featuring brass handles, a modernised cabriole legs and a curved silhouette, this side table is a quaint vintage match to the Balmoral Bed.

Parch Glass Table LampThe Parch features a glass column stem with a vintage metal base and Grecian urn topper. This table lamp has a romantic, Victorian feel that is modernised by its crystal glass make.

Shelby BedsideThe Shelby bedside is the perfect match to the Shelby bed. Featuring the same heritage design, create a Royal Suite with the Shelby Bed and side table.

Casablanca Palm Tree Table LampThe Casablanca lamp features a woven shade and palm tree embellished column. The combination of these two elements gives a British Colonial air that adds up to the style of any room.

Let our team of friendly experts help you create a stylishly grand bedroom!
Visit our online store www.bedworks.com.au to view our entire range. 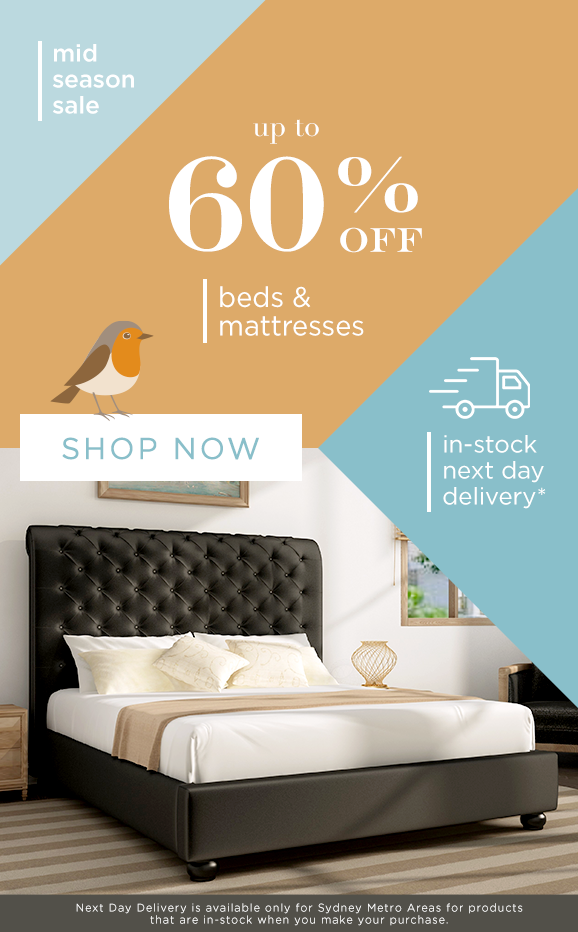 In 2020, we are celebrating 15 years of Australian

Do you love our Panelled wide headboard in velvet

Spruce up your bedroom with the gorgeous Paddingto

We introduce to you Eluma by Innovation Living, an